The Chimneys of Fort Haldimand:
For over two centuries the stone Chimneys of Fort Haldimand could be seen standing on the bluff above the head of Carleton Island. No one traveling the American channel could escape their view.  These chimneys were constructed for the barracks and buildings of Fort Haldimand about 1778 – 1780.  At the very beginning of the War of 1812 after the capture of Fort Haldimand by Captain Abner Hubbard, the British returned and burned the barracks. From the close of the War of 1812 and up into the 1830’s, squatters made homes around the abandoned chimneys. As time went on, Fort Haldimand became a pasture and the chimneys, one by one, crumbled and fell down.  By the 1970’s only one chimney was still fully standing.  The longevity of the chimneys is a credit to the artificers (engineers) and soldiers of the British Army and the luck that for most of the two centuries Fort Haldimand was a pasture. The farm’s cows kept back the growth of shrubs and trees.   An interesting note is that now some of the most dangerous vegetation to the remaining structure of the fort is the lilac.  Ironically these lilac bushes were bough to the island in the 1780’s by loyalists that were displaced from the Mohawk Valley during of the American Revolution.

“For more than half a century, the traveler on the River St. Lawrence by way of the American channel has not failed to notice a group of stone chimneys, standing on the bluff at the head of Carleton Island.”  (Durham 1889: 17) 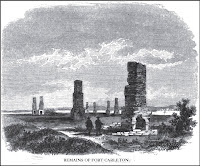 “As we approached the rocky bluff at the head of the island we observed several chimneys standing alone (built of stone, some perfect, some half in ruins), which mark the remains of strong and somewhat extensive fortifications” (Lossing 1868: 659)

This view is from the N. N. E. point of the fort, and shows eight of the nine chimneys yet standing. On the extreme right, beyond the little vessel, is seen Cape Vincent. (Lossing 1868: 659)

“The front of the fort commands the approach from the island, while a heavy wall 40 feet in height, is built along the bluff that borders the cove. Several chimneys are still standing within the fort and near it, built of stone in a permanent and massive manner” (Haddock 1895:122)
“Several chimneys occur outside of the entrenchment, and on the peninsula, in front of the fort. About a dozen still stand within the works, which are built of stone, in a permanent and massive manner, the flues being very small, and the bases enlarged and well founded.”  (Hough 1854: 22)
"In 1860 nine chimneys were standing on the site of Fort Haldimand." (Casler 1906: 125 )

Hough, Franklin B.  1854 . History of  Jefferson county in the State of New York, Earliest Period to the Present Time. Sterling and Riddell, Watertown, N.Y.

Haddock, John A. 1895. The Growth of a Century: as illustrated in the History of Jefferson County New York, From 1793 to 1894 . Weed – Parsons Printing Company, Albany, NY