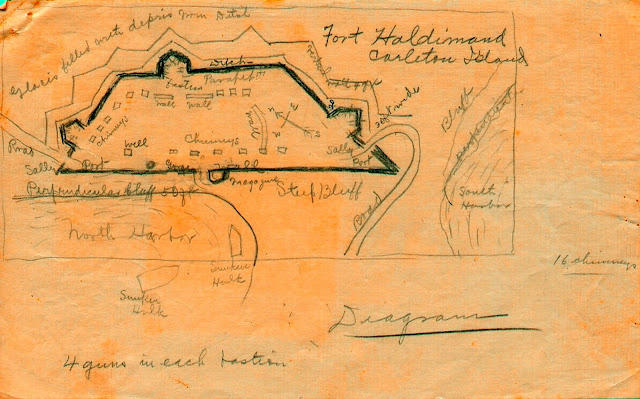 Unsigned and not dated this map is in a collection of documents at the Cape Vincent Historical Museum, Cape Vincent  NY.
at September 06, 2013
Email ThisBlogThis!Share to TwitterShare to FacebookShare to Pinterest 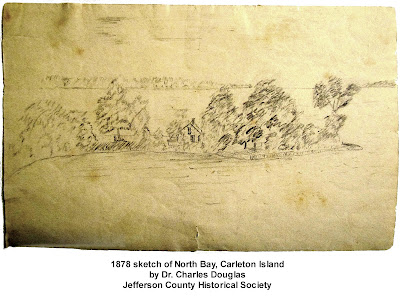 In 1878 Dr. Charles Douglas of Dexter, New York made a series of sketches of Carleton Island that he gave to his daughter, Helen A. Douglas of Black River. The original sketches, that included several views of Fort Haldimand, Chimneys and earth works as well as a few structures, are in the Jefferson County Historical Society in Watertown, New York. The 1878 sketch of North Bay is from Fort Haldimand at the top if the cliff looking down into North Bay with part of the head of the island in view. In the 1810 map by Colonel Gray the point was called Aubrey Head.
at June 05, 2013
Email ThisBlogThis!Share to TwitterShare to FacebookShare to Pinterest

Simple computer simulations of one of the Chimneys at Fort Haldimand

A possible future of Fort Haldimand is receation in computer animation.

at May 08, 2013
Email ThisBlogThis!Share to TwitterShare to FacebookShare to Pinterest

A brass pipe trade tomahawk was recovered as part the the "Carleton Island Project" in the early 1970's.  See the Post-Standard story written by Roger Segelken entitled, "History Beneath the St. Lawrence" http://home.ix.netcom.com/~srhf/SRHF_Empire.html


The brass tomahawk head without its wooded Haft (shaft) was recovered near the Revolutionary War period wreck in North Bay. The brass tomahawk was fitted with a steel edge that was dovetailed in the blade and hammered down into grooves in the head. The steel blade was covered with some corrosion. In the Post-Standard article the blade is shown after preservation and very little of it lost over the after 200 years that it was underwater.

There are raised horizontal moldings across the eye just below the neck, an engraved border, and conventionalized floral motif in the center of the eye. The border continues along the front and back of the blade, and down the center is engraved a single floral spray. According to American Indian Tomahawks By Harold L. Peterson, Museum of the American Indian Heye Foundation 1971, page 123 this was one of the commonest forms of brass tomahawk with dovetailed steel edge.


at March 15, 2013
Email ThisBlogThis!Share to TwitterShare to FacebookShare to Pinterest

We ( http://www.forthaldimand.com/ ) are looking for any information or records on people that may have been buried at the site of . The fort was located on in the town of . The island is across the St. Lawrence River from .


During the Revolutionary War, there may have been upwards of 1,000 people on the island consisting of British and Hessian soldiers, Indians, loyalist regiments and civilian women and children. Some records indicate both slaves and freed slaves and American prisoners of war were also on the island. was under British control from 1778 to 1812, after that time period and into the 1830's, the island supported an active logging and rafting trade of upwards of 200 families.


Historical records identify three different burial grounds. A military or post burial ground with at least 25 soldiers, an Indian burial ground and loyalist/settler burial ground of unknown size. There is no official recorded record of who is buried in these locations and even the exact locations have been lost over the years.


Any one with information about people that may be buried on Carleton can email info@forthaldimand.com or post on the facebook at


The following are people that are listed in the historical records as dying on . If anyone has any information on these people, please let us know.

at January 28, 2013
Email ThisBlogThis!Share to TwitterShare to FacebookShare to Pinterest

Iron Gun recovered in 1973 from the St. Lawrence River


The gun is a 9Pdr of 9 Ft 6 Ins (guns are recorded to their nearest 6 Ins). It was cast between 1731 and 1748. Probably in the period 1731 - 1734. 9pdrs for garrison service (usually long guns) were sent out to New England, including Boston, in 1754. On 19th May 1757 Govenor Shirley took some guns, including 2 X 9drs, out of Boston for service at Oswago and Crown Point. None of these guns were returned. More guns were taken later by Abercromby but these would seem to have been the 18Pdrs of which two burst in the defense of Fort William Henry.
Read more »
at January 22, 2013
Email ThisBlogThis!Share to TwitterShare to FacebookShare to Pinterest
Newer Posts Older Posts Home
Subscribe to: Posts (Atom)