British Military used the waters of the St. Lawrence River off Fort Haldimand for the abandonment of unserviceable iron ordinance to place them beyond use by the Americans in 1807.  Orders were issued in a letter written by Lieutenant Colonel James Green, Military Secretary, 1807.
In the early 1960’s scuba diving was in its infancy.  The  commercialization of the on- demand regulator invented by Jacques Cousteau and Emile Gagnan had started a revolution in underwater discovery.  This invention made diving equipment affordable and easily available to sport diving.  Two scuba divers from area, Jack Schum and Harold Baker Jr. came to in 1962 and while looking for old bottles discovered what Colonel Green had denied the Americans 150 years earlier. 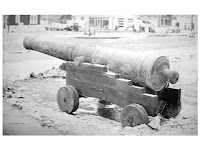 Headline October 31st 1962 as recorded in the Auburn Citizen:
“For Sale: Cannon from the St. Lawrence River Bottom”   The article went on to detail that the divers had recovered an 18 pound Iron Cannon near Carleton Island in Cape Vincent, NY.  It was 12 foot in length, its bore was 5 ½ inches and the barrel was marked with a Tudor-rose Crest and an arrow.

By March 1963 the cannon was in . It fell under the stewardship of Wallace F. Workmaster, curator of history for the State Education Department at Fort Ontario Historic site, on loan from the in .  At the time there was much speculation about the age of the cannon and how it came to be in the River. Mr Workmaster knew that much more research was needed to document its history. The cannon was too early a piece to be displayed in the mid-19th Century Fort Ontario. An appropriate carriage was constructed and the gun was mounted and displayed prominently on the approach to the fort. 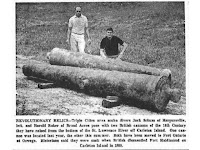 According to an 2009 email from Dr. Geoffrey Stine, to Dennis McCarthy SRHF,  in 1963 Mr. Schum and Mr. Baker were employed to recover a second cannon from . The cannon, similar in size to the first, had different markings and a different Rose and Crown cypher.  It was taken to where both cannons were on display to the public.  In the email from Dr. Geoffrey Stine, there was no record or documentation provided of the cannon recovery from its site  or the method used to recover it. 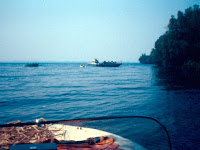 By the early 1970’s the story of the two iron cannons had faded from the headlines when a sport diver in 1973 located a third cannon at .

The two cannon recovered in 1962 & 1963 by Jack Schum of and Harold Baker, Jr., of are technically Iron Guns of the Calverin type. This is a class of artillery with a bore of 5.2 inches and that fired an 18 pound ball. Each cannon has a Rose and Crown Cypher which dates to before 1714.  The third cannon recovered in 1973 by Peter Perrault and the Syracuse Scuba Society Dive Club weighs about 3400 pounds and belongs to a type of artillery know as a Demi-Calverin that fired a 9 pound ball.  This cannon had the Rose and Crown cypher of George II which would make its age between 1727 and 1760.  (ref “Artillery Through the Ages” by A. Manucy)
Ordnance of these types were listed as being at as late as 1804 in the  British Military Records RG8 series.  These records also indicate that in 1807, with the possibility of the outbreak of hostilities between the and , steps were taken to prevent ordnance at from falling into American hands. The guns were most likely sunk in the River where they rested for over 150 years before being discovered. 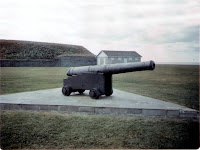 The Rose and Crown 18 pound cannons were displayed publicly at from 1963 to about 1994.  For a period of years, they were protected by annual hand treatments with Crown Metal Preservative which had worked well to protect the cast iron.  At some point in time, these treatments were stopped. The exhibition of the two large cannons outside was ended when the guns were taken to the Peebles Island Resource Center of New York State Office of Parks, Recreation , and Historic Preservation, .   The 12 pound George II is on public display at and remains outside all year.
According to Geoffrey Stein of the , the two Rose and Crown 18 pound cannons went to the in 1996 subject to yearly loan renewal. The cannons remain in at present.

As to the origin of the guns, the most detailed information is a letter documenting the guns location at the end of the seventeenth century based on inscriptions found on the cannon and  recorded in the 1698 Board of Ordnance survey in Britain. The information was provided to Parks in 1985 by Adrian Caruana of Swansea, Hampshire, U.K., a  retired Royal Artillery officer and researcher. There are some issues with this information and it is not collaborated or conclusive. The 12 pound cannon of George II seems to have less know about it.

Futher research done Charles Trollop of Ordinance Society of Great Brittan. From the marking on the iron guns and information in the “The Browne survey” which was carried out by British ordnance in 1699 and  preserved in the British National Archives, he was able to specificly identify the guns as follows. 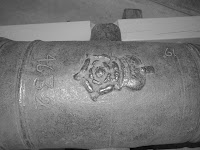 The oldest, weight 52-2-23, was cast in Kent of Sussex (The Weald) by George Browne (a) and after proof was entered in the Board of Ordnance Bill Book on the 17th October 1668 as part of a batch of 10 culverin of 11 Ft (PRO WO51-9) .  These guns were allocated to Tilbury Fort which was being upgraded after the Dutch raid on the Thames and Medway Rivers in 1667. The survey number 4632 was inscribed around 1700 as part of Brown's survey (now PRO 55-1736) of all guns in the Navy and first class forts, some 14,000 (yes fourteen thousand!) guns in all.  Some time in the next 40 years it was replaced and allocated to New York in November 1739 (PRO PC2 - 95).  The rest is your local history as to when it went to Fort Haldimand where both guns were recovered, so I was told at the time. 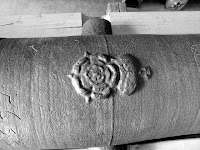 The number 5633 is, as above, part of Browns survey and inscribed when this gun was aboard the Vanguard. This gun also went to New York in 1739.