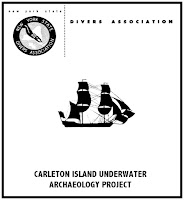 From 1974 to 1975 an Archaeological excavation was carried out to explore for and to recover objects of historical or archeological interests on land under the waters of the St. Lawrence River at and about the head of Carleton Island (Town of Cape Vincent, NY), including areas know as Merchant’s Cove, Shank’s Bay (North Bay) and Government Bay (South Bay), in Jefferson County, NY.


The NYSDA Underwater Archeology Committee (NYSDA UAC) was listed as the Permittee for the permit and other organizations were listed as cooperating.  Some of the waters covered by the permit (see Historic Bay Closed) were in private hands and the NYSDA AC also had a letter from the land owner giving them permission to explore and excavate.


The focus of this survey was a wreck located in on and to a lesser extent several underwater structures that were the remains of rock filled cribs.


The NYSDA UAC was organized with a committee chair Howard Trowbridge and a Project Manager Peter Perrault. Both were degreed engineers and certified scuba divers.  The site manager was Raymond “Skip” Couch and a research committee was set up by Dennis McCarthy.  NY State provided some training classes in for divers interested in working on the site. NYSDA UAC developed two documents that served as a basis of the excavation and recovery of artifacts.

New York Office of Parks and Recreation set up a preservation lab in to receive artifacts and put them through a preservation process.  In 1975 they also hired an U/W Archaeologist to take over responsibility for artifact preservation and monitor/instruct the NYSDA divers.

The first phase of the ship excavation was in 1973 by placing of a wire grid structure over the site, followed by detailed drawings of individual squares until the entire site was mapped.

During the years 1974 and 1975 the ship was excavated during the summer.  Artifacts were recovered bagged, recorded and sent to Sackets Harbor.  Photos were taken on site of artifacts as well as features on the wreck. This included a hole chopped in the bottom of the wreck near the stern indicating that it had purposely been sunk.

By 1976 the NYSDA AC had completed its work and the Archeologist with New York Office of Parks and Recreation was left to write his report and re-cover the wreck site.

In 1976 an unpublished "Preliminary Report on the Underwater Archaeological Investigations on Carleton Island, St. Lawrence River, N.Y". was drafted by the State Archeologist, Joseph Murphy.

A 1976 Parade Magazine article document much of the project from the divers perspective  History beneath the St. Lawrence 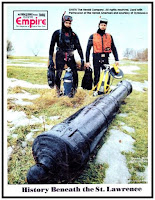 In 1974 at the Annual Meeting and Conference of NYS History and Waters, Dennis McCarthy presented a paper “Ships and Shipping on Lake Ontario before 1800”. The presentation outlined the NYSDA research committee’s work that identified the most probable identity for the North Bay Wreck. This was the Haldimand, a British vessel built in 1771 at Oswegatchie (near present day Ogdensburg NY) and taken out of service at Carleton Island in 1783. She was converted into a “sheer hulk” to be used in maintenance of other ships.

NYSDA UAC also did a preliminary survey of a site of a submerged pier in . The pier was mapped and a limited excavation of a test square was completed. Do to a lack of resources only the preliminary work was done.  NYSDA North Bay Survey documents.   Underwater video of North Bay Dock 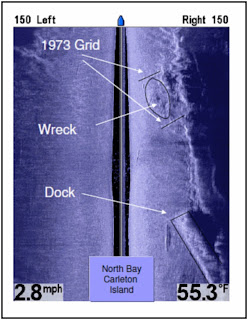 * NYSDA was a non-profit organization dedicated to promoting and protecting the sport of skin and scuba diving, organized in 1961.
Email ThisBlogThis!Share to TwitterShare to FacebookShare to Pinterest
Home
Subscribe to: Posts (Atom)